The Amarillo VFW, properly known as Golding-Meadows Post 1475, began in Amarillo Texas November 26, 1926. Although we were known as the John B Golding Post until combining Amarillo post  1907 and including Durward Meadow into our name in 1947.

Golding was the commander of the 131st FA unit in Amarillo during the 20's He proudly served as a major during WWI in France. Within a year of his passing at Northwest Texas Hospital the Amarillo VFW was born.

Meadows, a former student of Amarillo College, was stationed in Pearl Harbor on December 7th 1941. He was the first resident of Amarillo to be killed in what was to become WWII.

Entering our 9th decade of service to Amarillo and surrounding area The Amarillo VFW continues to stand ready and assist. 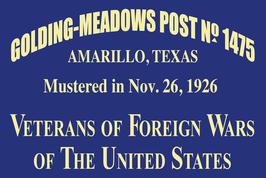